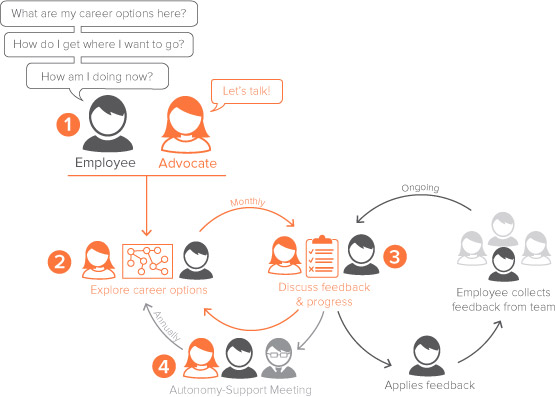 How do you fix a broken legacy performance review system that gives people feedback only once a year and is directly tied to compensation? That is a challenge that we at Asynchrony undertook recently with the guidance of modern social science and — as you might expect from an organization infused with agile thinking — with agile principles.
First, the situation: We’ve tried to make the best of a traditional annual review system over the years, but we’ve come to the end of our rope. We realize it’s not working. That’s because of these dysfunctions:
In short, it was a fairly traditional performance-review system, common to many organizations.

“It’s not about the review”

Reviews shouldn’t be the end; they should be the means to the end of improvement. Two structural aspects of the traditional, compensation-dependent reviews precluded real improvement: First, the length of the feedback loop — a year — is much too long for useful, actionable feedback. Second, tying compensation to the review by almost by definition prioritizes the review over improvement. And it encourages people to view their work as a means to the end of the external reward of compensation over the intrinsic reward to mastery the role improvement plays in it.
Most critically, as modern social science tells us, the linkage between compensation and performance creates an unhealthy crowding out of people’s intrinsic desire to improve. As Daniel Pink points out in Drive: The Surprising Truth About What Motivates Us, describing an experiment,

Adding a monetary incentive didn’t lead to more of the desired behavior. It led to less. The reason: It tainted an altruistic act and “crowded out” the intrinsic desire to do something good.

So we understood the problem — but how would we solve it?

How we approached it

We decided to approach the problem with a safe-to-fail experiment (as a limited-participation, voluntary pilot) focused on:
We spent some time designing a simple but profound  alternative program that we could run alongside our legacy program and then invited volunteers to participate. We called the new thing the Advocacy Program. In order to baseline the current state and validate our widespread anecdotal belief about our colleagues’ dissatisfaction with the review and feedback process, we surveyed the company with a single Net-Promoter-style question: How satisfied are you with our current process? The results? Let’s just say that a company whose product registered such an NPS score would be out of business. The good news was that we had lots of room to improve!

How we designed it

Inspired by agile principles like building projects around motivated individuals, face-to-face communication, simplicity, self-organization and reflective improvement, as well as recent research on motivation, we designed the program on the strength of peer relationships and the decoupling of compensation from review and improvement. Our professional-development team had previously created a kind of manifesto to guide our thinking, valuing*:
The result was an ongoing peer-to-peer relationship in which an employee guides a colleague in career options and feedback and advocates for career growth. Rather than Human Resources surveying various teammates of an employee from the past year, the employee would be responsible for gathering and incorporating feedback on an ongoing basis. Rather than HR scheduling a review with the employee’s manager, the employee would have the option to have his or her advocate schedule an autonomy-support meeting with relevant executive leaders.
Some rules:
Why would people want to participate? We predicted benefits for employees such as:
And for advocates:
The professional development team would support advocates and their people via training and tools, such as initial training, job aids and quarterly support sessions.
Rather than the employee’s manager writing the annual review, the advocate pairs with the employee to write it, so it’s open and transparent. But it also means that the employee owns it more. Working with executive management to find out what they were interested in, we offered a one-page template that included categories like stuff you’re proud of, stuff you want to improve on and how management can help you. The last item on the list is meant to be the basis for the autonomy-support meeting, an optional gathering facilitated by the advocate, the employee and relevant executive leaders. As Pink notes:

Researchers found greater job satisfaction among employees whose bosses offered “autonomy support.” These bosses saw issues from the employee’s point of view, gave meaningful feedback and information, provided ample choice over what to do and how to do it, and encouraged employees to take on new projects.

Of the 210+ employees we had at the time we launched the pilot, 43 people participated in the program as employees and 65 total people, including executive leaders and advocates (some people participated both as employees and advocates) were involved. Because we ran the program alongside the legacy review program, we’ve had some confusion about the program elements (“Do I still have a performance review?”— no. “Do I still need to fill out peer reviews for people in the legacy program?” — yes.). But we’ve saved hundreds of hours in avoiding the traditional peer reviews, and management and employees have anecdotally reported satisfaction with the new setup. The freedom to obtain feedback on one’s own terms has led to some creative and individual approaches, and I’ve had the privilege of hearing firsthand some of the conversations that the emphasis on personal, face-to-face feedback has inspired. I participated in two autonomy-support meetings — one as an employee, one as an advocate for an employee — and was amazed at the strange new dynamic of true servant leadership that it generates. The program hasn’t been without its challenges, but we’re already improving the program to support as many people as want to do it, with the goal being everyone in the company advocating for each other and helping each other improve.
* while we find value in the items on the right, we value the items on the left more

6 thoughts on “An agile approach to the traditional performance review”

Schedule Time With Me